CEX vs DEX - the rise of decentralised exchanges

DeFi is taking over. What are decentralised exchanges and how do they measure up to their centralised alternative?

Along with the rise of digital currencies in the past decade or so, more and more digital currency exchanges have become available on the market. The majority of these exchanges are centralised exchanges, but the times are changing. As technology is incessantly advancing, new solutions are brought to light. DeFi are changing the worldwide market and decentralised exchanges are a promise of a new future and opportunities for traders all over the world.

CEXs are currently the most widely used mode of operation for cryptocurrency exchanges. Let’s jump right in to find out how they work and what makes them such an optimal choice for digital currency traders.

Centralised exchange in many ways is similar to a traditional stock exchange. However, it deals in crypto assets instead of shares. A CEX typically uses order books to facilitate trade between users. The order book records every buy and sell order placed by individual traders - each order has a specified amount of currency and the price to be bought or sold at. Then, the corresponding purchase and sell orders are matched and they can be executed.

One of the biggest differences between CEX and DEX is the third party involvement. CEX is run by a private, for-profit company. Centralised exchanges do not reveal their internal operations to the users, the customers do not have the full authority over their assets, or the access to their private keys, which makes CEX lack in transparency. Data on CEX is exchanged internally via dedicated servers and passes through centralised security processes. Centralised exchanges are more prone to hacking attacks.

Centralised exchanges are under regulatory supervision, and that is why they typically have existing authorisation policies, such as the requirement to pass KYC (know-your-customer), or anti-money laundering (AML) systems put in place.

Some of the biggest advantages of CEX over DEX are higher trading volume (as they have been around for longer and have gathered a bigger number of traders), higher trading speed and a user-friendly interface. Generally speaking CEX is easier and quite convenient to use, and that is why centralised exchanges are typically the beginners’ first choice for trading and managing their digital currencies.

On centralised exchanges you can find a very wide range of trading pairs. That includes fiat trading pairs, which means you can purchase cryptocurrencies with fiat money. Deposits and withdrawals in fiat currency are also possible.

Decentralised exchanges offer solutions to the biggest downsides of CEX - such as third party influence, lack of transparency, flawed security and lack of anonymity.

A DEX is not based on internal servers and its own IT infrastructure but it acts as a decentralised application (dApp) on a blockchain. This allows the decentralised exchange to be free of third-party (such as authorities or financial regulators) involvement in monitoring or imposing regulations.

Transactions on DEX are non-custodial, which means that assets, at any point of service or transaction, aren’t controlled or possessed by an outside party. Instead, the exchange of assets is regulated using smart contracts - self-executing series of code that run on blockchain networks. This means the actual asset never passes through the hands of an intermediary.

The implementation of distributed ledger technology solutions allows DEX to increase the transparency of transactions and asset management. Users have access to their private keys and have complete control over their assets. Blockchain significantly increases security and minimises the risk of piracy or hacking attacks.

Unlike CEX, decentralised exchange offers anonymity to its users. There is no need to pass KYC and upload personal documents online, nor are there AML measures in place.

Unfortunately, operating on decentralised exchanges can be less straightforward, especially for people not well-versed in navigating the De-Fi space. The layout is not as user-friendly and it might take some getting used to for the new traders. The decentralised exchanges are still being developed, which means there are less trading features (such as limit orders, margin trades, or stop losses). However, the decentralized exchanges are working towards adopting the functionalities known from CEX, so hopefully it is only a matter of time when they become available to users.

DEX and CEX - a comparison

So what exactly are the biggest advantages of one type of digital currency exchange over the other? Let's sum it up. 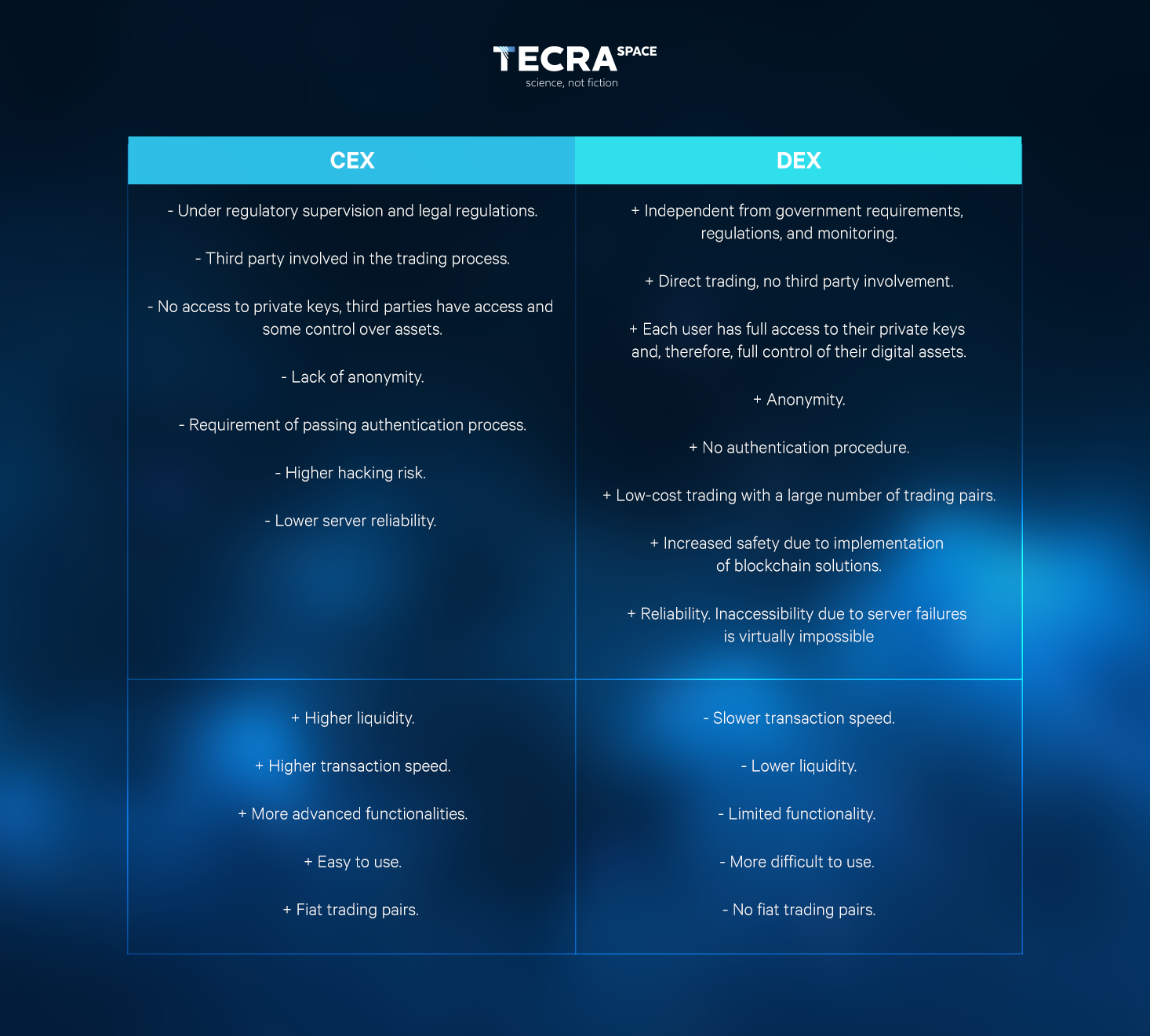 Tecra also takes part in re-shaping the financial world. We have received the Smart Growth grant from European Union for the research on blockchain technology, and further for development and launch of a decentralised exchange platform - Tecra DEX. Our specialists are working on developing an effective and accessible decentralised platform for the exchange of digital assets (such as patents and other intellectual property rights) by the use of token economy.

Decentralised cryptocurrency exchanges, such as Tecra DEX, are aimed at solving problems that are inherent in centralised exchanges. In case of our platform, introduction of the exchange will bring De-Fi solutions to the field of project financing. It will be the place to trade tokens, which play a vital role in Tecra’s ecosystem. Tecra DEX is currently at the development stage and we are working towards launching the platform in the first half of 2022.